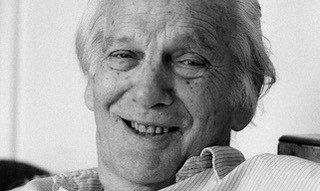 Photo by Caroline Seymour. (Permission to use photo from Dr Ryle’s family)

Cognitive Analytic Therapy (CAT) is a time-limited, integrative model originally created for use in the NationalHealth Service in the UK by Dr Anthony Ryle in the1960’s and 70’s. Ryle observed that people suffering from mental distress appear to be trapped in ways of responding to their distress that serve to exacerbate rather than alleviate their feelings. He wanted to find a way of compassionately understanding a person’s difficulties and to develop this collaboratively with his clients using a shared language that they would understand. He began writing papers about integrating dynamic ideas like object relational theory about the importance of early attachment experiences (Winnicott) with the newer and more practical cognitive theory(Beck) emerging at the time. By the time he was appointed as consultant psychotherapist at St Thomas’Hospital in London in 1980, he had started to integrate other ideas as well, such as personal construct theory(Kelly) and the observations of those writing about infant development (e.g., Stern). Mikael Leiman assistedRyle to incorporate the ideas of Vygotsky  and Bahktin which provided useful ideas about how the early relational experiences might be internalised and how therapists can best scaffold the learning of their clients, much like a parent assists their child to learn. Ryle’s approach was also influenced at the time by practical and political issues, such as the challenges of access to psychotherapy experienced by complex disadvantaged clients. This led to the development of a brief intervention, commonly 12-16 sessions long, that focuses on empowering clients to better understand themselves and develop skills they can use to manage their lives in the future

CAT in Australia and NZ

Cognitive Analytic Therapy (CAT) was introduced to Australia in 2001 as part of a research trial of interventions for young people with borderline personality features conducted by the Helping Young People Early (HYPE) program, at Orygen, Melbourne. A core group of four staff were trained and supervised by Dr Anthony Ryle (the originator of CAT) , Ian Kerr and others from ACAT in the United Kingdom over the two years of the trial. CAT continues to inform all aspects of the HYPE model. HYPE staff were assisted by Dr Anthony Ryle, Ian Kerr and ACAT to establish the Orygen CAT training program in 2003. Initially a six-month CAT Skills training was offered, and in 2014 this was expanded into the two-part CAT Practitioner training that is offered currently (see links) CAT has been established in New Zealand since 2005 following a series of introductory CAT workshops. This was followed by intensive trainings for staff working in inpatient mental health teams, training to primary care managers and GP’s using a CAT approach to formulation and conference presentation in the field of personality disorder. Interest in CAT training in New Zealand continued to grow and introductory courses are regularly offered. Several clinicians have continued to develop their clinical skills in CAT through ongoing CAT supervision. December 2010 saw the launch of a New Zealand CAT skills training course in Auckland and 2016 saw the launch of the first CAT practitioner training which continues with the support of UK CAT practitioners. (See training/events for NZCAT training). The Australian and New Zealand Association for Cognitive Analytic Therapy (ANZACAT) was established in 2010, and aims to bring CAT Practitioners, Supervisors, and Trainers together to support the practice and training in CAT across the region. ANZACAT members helped found the International CAT Association (ICATA), and two ANZACAT representatives sit on the ICATA executive board.